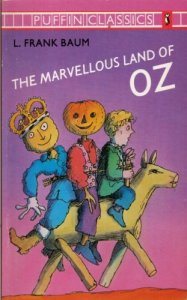 Seeing that I have very much loved The Wonderful Wizard of Oz, I knew I had to read the second installment, The Marvelous Land of Oz by L. Frank Baum. I was a little saddened though upon finding out Dorothy’s not in it, and so I assumed it wasn’t a continuation of the first book. I still read it nonetheless because I greatly missed and wanted to go back to Oz.

The main character this time was a boy named Tip. After escaping from his witch guardian old Mombi, his adventures with several odd personages soon start.

I immediately liked the story as soon as I’ve begun reading (you would too if you like magic), but I thought it took too long before the purpose of their journey was revealed. I knew Tip was running away from old Mombi, but I guess I was looking for something more than that. I think I had to remind myself that this is not book one, where every single one of the travelers had each a definite reason for wanting to see the Wonderful Wizard.

Despite that, I was still engaged in the story because L. Frank Baum’s wit and imagination were just superb. I’ve met a lot of queer characters I’ve never read about nor heard of before, and I actually found some lines funny. Something else that pleased me was the mention of Dorothy and her past adventures (it seems to me a big part of Oz’s history, judging by the way the characters talked about her), and a few old characters were there in the book, two of which were the Scarecrow — oops, I mean Your Majesty the Scarecrow, and the Tin Woodman, who’s now an emperor.

What I’m not sure I liked was the ending. I have mixed feelings about it. I liked it because I thought the concealment (of what or whom I am not going to tell) was clever. But I also did not like it because I found it extremely comical and strange (but then again everything in the book is strange), and I don’t know how to put it without spoiling anything, but let’s just say I’m going to miss Tip very much since I don’t think I’ll ever see (or, rather, read about) him again. I hate having to miss characters I’ve learned to love.

The Marvelous Land of Oz  is a continuation of the first installment after all, even without Dorothy in it. Overall, I think this book is a very enjoyable read. Something to remember though is the year it was published (1904) — just in case you find some issues with gender and such.

The Marvelous Land of Oz by L. Frank Baum is the second of fourteen books in the Oz series and was published in 1904.